Top 10 things to do in Phuket

Phuket is fast becoming one of the most popular tourist destinations offering everything from pristine beaches to top class entertainment and  5-star hotels.

The locals are amongst the friendliest people that you could meet. Their willingness to help in any way extends throughout the city and is a part of why Thailand is such a great place to visit.

You could quite easily relax the days away poolside at a resort, or spoil yourself with a massage and waiter service. If it’s adventure you seek, go white water rafting, hire a scooter or parasail and watch the sunset from above.

Phuket offers so much for the avid traveller, here is our top 10 things to do. 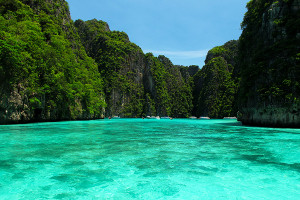 The famous Island is situated about 45 minutes by boat from the mainland. A paradise away from all the hustle and bustle, Phi Phi is known for its laid back attitude and is the perfect place to unwind.

A day tour to Phi Phi is a great way to sample the Island. Have lunch one of the many restaurants, hike up to the viewpoint or just bring a towel and lay on the beach. 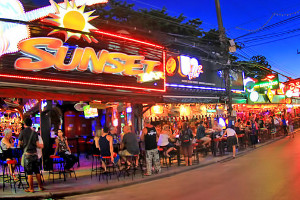 Bangla Road is undoubtedly the heart of nightlife in Phuket.

As the sun sets, the road is closed to traffic and comes to life. Bars dominate both sides of the street while the side roads called soi’s, are like mini entertainment clubs. When entering a soi you must do so with an open mind, much like a warped strip club, you will see things that you can never unsee.

Not to be put off, Bangla Road is what put Phuket on the map, and you simply must experience it in all its glory. 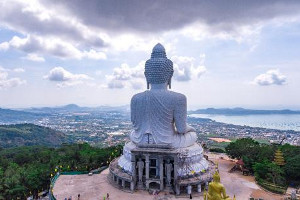 The Giant Buddha is a massive statue that you can see from anywhere in Southern Phuket.

Standing atop the Nakkerd Hills, the Buddha towers 45 meters into the sky and stretches 25 meters at its base. Built back in 2004 from funds donated entirely by tourists and locals at a cost of around 30 million baht.

A short 6km drive to the top of the hill is worth it not only to see the Buddha but for the breathtaking views of the bays and the city. 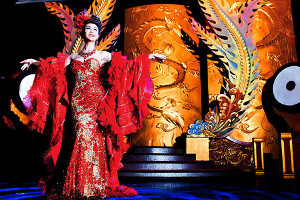 The Simon Cabaret Show is a fun, fast-paced, exhibition of singing, dancing, and glistening costumes. Be treated to a Vegas-style production with one little twist, all the performers are transexuals and cross dressers, otherwise known in Thailand as ladyboys.

You won’t believe your eyes that these beautiful, slim figured dancers are all male. Half the fun is watching the reactions of people in the audience as they catch on.

Tickets are a steal at only $30 each. 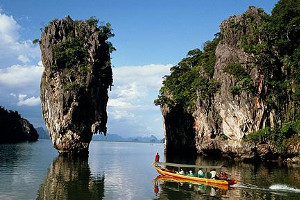 Arguably one of the most visited parts of Phuket is Phang Nga Bay. Known for its sheer limestone karsts that reach out vertically over the clear water.

The bay itself is massive and the best way to see it all is by booking a tour or hiring a speed boat for the day. Stop for lunch at Koh Paynee; a small village built on stilts over the water. Another great stop is Koh Hong; here you can see ancient paintings of animals and boats on rocks walls.

James Bond Island, made famous from the Bond film “The Man with the Golden Gun”, is by far the post popular island to see. 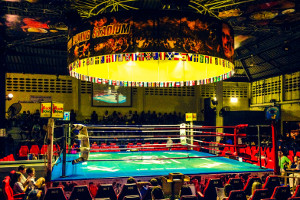 Muay Thai Boxing is a spectacle that thrills onlookers most nights of the week. Held at Patong Boxing Stadium on Sai Namyen Road, locals and tourists rush to fill the seats and put on bets before the first fight starts.

Not just punching and kicking, the fighters strike with elbows and knees, and land crushing blows to the head and body with everywhere being fair game. Each action packed fight goes for about fifteen minutes in total.

Pumped up with music and commentary each fight lasts about fifteen minutes in total. Not for everyone, but if you don’t mind a bit of healthy competition, then put this on your list. 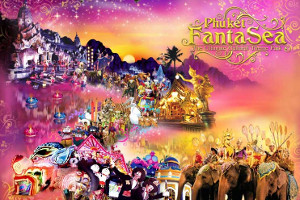 With a huge cast of trapeze artists, dancers, actors, and animals, FantaSea is by far Phuket’s biggest show. Set on a huge stage with seating for thousands, then enjoy a show inspired by Thailand’s rich and exotic history.

Before the show, you can have dinner at the buffet restaurant which is one of the biggest in Asia. You can take photos with elephants next to the palace, shop for souvenirs, or walk through an Adventure Center. The whole place gleams with over the top extravagance.

For just $90 per person, you get a round trip bus to and from your hotel, a buffet dinner, and the show; which is fantastic value! 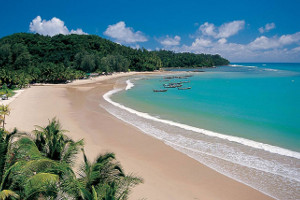 Patong Beach is the place to go to relax and unwind when in Phuket. You can always find something to do there be it people watching or taking in some extreme sports.

The most popular activity would have to be the parasailing. Boats are constantly going back and forth floating people up into the sky until late in the afternoon. You are in safe hands with one of the locals dangling above you the entire time, ready to help you land safely back on the beach.

Jet Skis are also quite popular along the beach as well as surfers and wake boarding. If relaxing is more your pace, there are always massage ladies ready to relieve the stresses of your day. 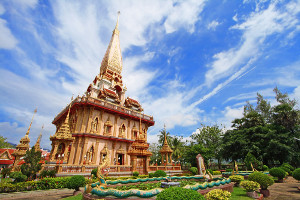 The most famous temple in Phuket is the Chalong Temple, which is visited by locals and tourists alike.

The locals come here to pray and worship the two founding monks, while tourists come to admire the architecture and lavishly decorated rooms of the temple. Built over three floors, you can explore the entire temple inside as well as all the outlying buildings.

Also on the grounds is The ‘Chedi” temple, which is said to hold an actual splinter of bone from Buddha himself. 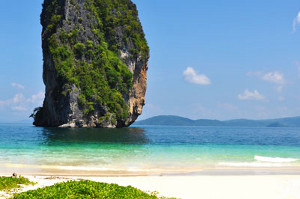 Hongs, or rooms in English, refer to the hidden caves in and around Phuket. One minute you are paddling in a dark passage, the next the cave opens out to a spectacular hidden paradise.

The best place to find out of this world scenery is Phang Nga Bay. The only way to get to the hongs is by kayak or by inflatable canoe.

There are great tours that take you out on a speedboat to the best locations. Some will even whip out the canoes and do all the paddling for you.